'Princess Coronation' Pacific No.46236 'City Of Bradford' roars past Sears Crossing signal box heading the up 'Royal Scot' in 1956 with just 38 miles to the buffer stops at Euston and journeys end.
No.46236 was built as a streamliner at Crewe in July 1937, de-streamlined in July 1948, sloping smokebox removed in November 1953 and received green livery during August 1955 ultimately receiving red livery in July 1958 and withdrawn from service in March 1964. 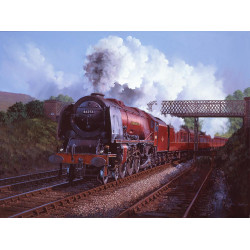 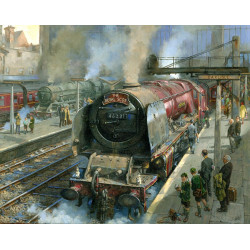 Spotters At Carlisle by David Noble